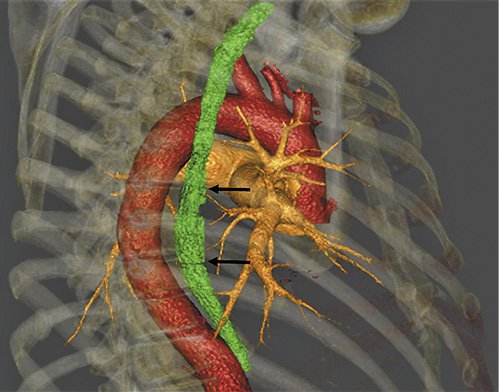 Cardiological patients with malignant tumors belong to a complex category of patients. We present the world’s first case of simultaneous surgical treatment of severe mitral valve disease and esophageal cancer. The patient underwent simultaneous replacement of the mitral valve and the Ivor-Lewis procedure using right thoracotomy and upper midline laparotomy. The patient underwent 3 courses of chemotherapy (paclitaxel and 5-fluoroucil). Follow-up for 8 months showed no signs of tumor recurrence or cardiac problems. A dextral thoracotomy with the lung deprivation, supplemented by an upper median laparotomy, achieved us convenient access to the mitral valve and to all parts of the esophagus, including groups of compromised lymph nodes. This case demonstrates the modern possibilities of simultaneous cardio and oncosurgery that allows eliminating competitive fatal diseases in 1 surgical and anesthetic intervention.

Cardiological patients, who are in great necessity of surgical treatment of noncardiac conditions, especially malignant tumors, belong to a complex patient category because one of the diseases can be a contraindication for radical treatment of another [1]. According to a recent major epidemiological study, there are about 5000 cases of esophageal squamous cell carcinoma registered annually in the Russian Federation among men and >1000 among women [2]. It is known that postoperative mortality risk increases several folds in patients with mitral valve disease and concomitant conditions [3]. In the current report, we present the world’s first case of simultaneous surgical treatment of severe mitral valve disease and esophageal cancer.

A 57-year-old man with a history of frequent angina and a persistent form of atrial fibrillation was admitted to a cardiac surgery clinic for surgical treatment of a mitral valve abnormality. Transthoracic echocardiography revealed a significant fibrotic deformation of the mitral valve cusps with regurgitation up to 4°, an opening area of no >1.5 cm2, an average transmitral gradient of 9–11 mm Hg, an increase in the volume of the left atrium to 203 mL, and pulmonary hypertension up to 50 mm Hg. Meanwhile, the contractile function of the left ventricle was not reduced – ejection fraction 62%. There were no pathologies of other valves revealed. Considering the examination protocol and complaints of epigastric pain and heartburn, the patient underwent upper gastrointestinal endoscopy. Tumor of the midthoracic esophagus measuring 2 × 3 × 4 cm was revealed, histologically squamous cell carcinoma grade 2 сT2N1M0. Abnormal metabolic activity of esophageal wall tissue at the Th7 level and metabolic-active paraesophageal lymph nodes at the Th2–Th3 level were exhibited during CT and positron emission CT (Fig. 1). There were no distant metastases detected. The patient underwent simultaneous replacement of the mitral valve and the Ivor-Lewis procedure using right thoracotomy and upper midline laparotomy.

Computed tomography 3D reconstruction of the chest of patient U (esophageal tumor marked with arrows).

The operation was accomplished under general anesthesia, using a double-barreled tube and deprivation of the right lung. The femoral vessels were cannulated for cardiopulmonary bypass. Thoracotomy was performed on the fifth intercostal space of the right side, the mediastinal pleura was lanced, the esophagus was mobilized from Th2 to the diaphragm, and enlarged paratracheal, paraesophageal, and tracheobronchial lymph nodes were visualized. A circular tumor of 3 × 4 cm in size was found in the mesothoracic part of the esophagus which was not attached to the mediastinal pleura. At the next stage, resection of fibroly altered mitral valve flaps with its prosthetics with a mechanical prosthesis No. 33 was performed with an approach through the Waterstone furrow in the conditions of antegrade pharmacologic cardioplegia (Fig. 2). We did not observe any problems with the restoration of cardiac activity, withdrawal from cardiopulmonary bypass, and bleeding. The cardiopulmonary bypass time was 120 min, and the aortic compression time was 70 min. Afterward, through supramedian laparotomy, preserving the right gastroepiploic vessels and abscission of the left was accomplished. The stomach and esophagus were mobilized in the area of the diaphragmatic foramen. А graft was created from a large curvature using linear staplers (Fig. 3, 4). Resection of the esophagus and a small curvature of the stomach and 2F lymph node dissection were performed. Gastric graft was end-to-side anastomosed with an esophageal stump. There were no complications in the early postoperative period (Fig. 5, 6). The patient underwent 4 courses of chemotherapy (paclitaxel and 5-fluoroucil scheme). During 8-month follow-up, there were no signs of tumor recurrence or cardiac problems (Fig. 7).

Intraoperative photo. Gastric graft in the posterior mediastinum after anastomosis with the esophagus.

Computed tomography 3D reconstruction of the heart and blood vessels of patient U after surgery.

Computed tomography 3D reconstruction of the chest of patient U after surgery (the esophageal-gastric anastomosis marked with arrows).

Photo of the patient 5 months after the procedure.

Esophageal cancer is a high mortality rate disease, reaching up to 82% in less-developed countries [2]. By contrast, the 30-day postoperative mortality rate in this cohort is no >7.3%, and the 5-year survival rate is up to 60% for localized cancer [4]. In the actual literature, we have discovered isolated reports of simultaneous surgery for cardiac pathology and esophageal cancer. Thus, Yang Y et al. [5] acquainted 2 cases of combined esophageal cancer surgery with coronary artery bypass grafting, while both patients were alive during 10 years of follow-up. Reassuring results of simultaneous coronary artery bypass grafting and esophagectomy are also presented in several recent reports [6, 7]. Buqing Ni et al. [8] reported 2 cases of simultaneous treatment of esophageal cancer and left atrial myxoma. The authors used an analogous thoracoabdominal approach; 1 patient died of esophageal carcinoma local recurrence at 18 months after the operation. Patients with severe cardiac pathology and malignant neoplasms are still the subject of discussion regarding treatment approaches. The aforementioned publications demonstrate the possibilities of simultaneous surgery. In the case of our patient, esophageal surgery was not feasible without eliminating the heart abnormality, and step-by-step treatment could provide heart failure, tumor progression, or GI tract bleeding that all can be fatal for the patient.

A dextral thoracotomy with the lung deprivation, supplemented by an upper median laparotomy, achieved us convenient access to the mitral valve and to all parts of the esophagus, including groups of compromised lymph nodes. The aforementioned case demonstrates the modern possibilities of simultaneous cardio and oncological surgery, which allows eliminating competitive fatal diseases in 1 surgical and anesthetic intervention.

The article describes a case report. Therefore, no additional permission from our ethics committee was required (Local Ethics Committee of Sechenov University). Written informed consent was obtained from the patient’s legal guardian for publication of this case report and any accompanying images.

The authors have no conflicts of interest to declare.

This study was not funded.

All data generated or analysed during this study are included in this article.