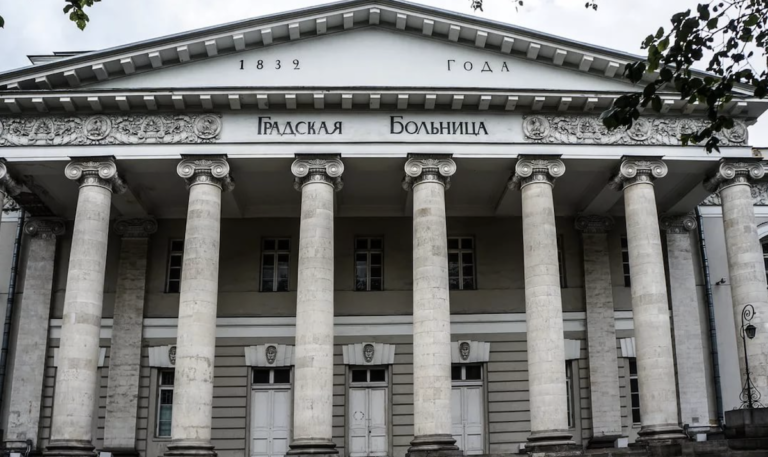 History of the Hospital

The First City Clinical Hospital № 1 named after N.I. Pirogov (First City Hospital) is a clinical hospital in Moscow, which was founded in 1802 and is active to this day. It reports to the Department of Health of Moscow.

The hospital is a clinical site of the Pirogov Russian National Research Medical University.

N.I. Pirogov City Clinical Hospital №1 is one of the leading multi-profile medical institutions in Russia. For more than two centuries the hospital has been providing medical care to those in need.

Golitsyn Hospital traces its history back to the late 18th century. In memory of his beloved and only wife Catherine Golitsina (Kantemir), Prince Dmitry Mikhailovich Golitsyn bequeathed to build "a human-loving, useful institution for the Fatherland" with all the accumulated capital. Princess Golitsyn, who died early, was distinguished by her kindness and responsiveness to the grief and illness of others. The princess left after her death a large donation in favor of obstetrics in Russia. With the interest from her bequeathed capital every six years, three graduates of Moscow University went to the University of Strasbourg to study the art of midwifery.

After the death of Prince Dmitry Mikhailovich Golitsyn, his cousins Alexander and Mikhail began construction of the hospital buildings on the bank of the Moscow River (still preserved today). They invested in the construction a lot of their own funds in addition to those bequeathed by Dmitry Mikhailovich. Also, Empress Maria Feodorovna, wife of Paul I, took part in the construction of the national hospital. In 1801 was built a church in the name of the Holy Tsarevich Demetrius, solemnly consecrated in the presence of Emperor Alexander I.

The hospital was opened on July 22, 1802. It was built with money bequeathed by Prince Dmitry Mikhailovich Golitsyn for the construction of "God-pleasing and useful for people" institution. The prince generously used his money, leaving it for a good cause. The best architects of the time – Vasily Bazhenov and Matvey Kazakov – were hired to build the hospital. The building, erected according to their designs in the "Moscow Empire" style, has survived to this day. The first patients of the institution were the poorest citizens of the city from the socially unprotected strata of the population. The chief doctor of the hospital was an outstanding surgeon, professor of Moscow University E. O. Mukhin. A year after its construction, he achieved the abolition of treatment fees for all estates, except for serfs.

In 1828, construction of the First City Hospital began next to the Golitsyn Hospital – a majestic building with a solemnly decorated facade and the dome of the Church of Mary Magdalene.

On 27 October 1833, next to Golitsyn Hospital, the First Gradsky Hospital, designed by architect Osip Ivanovich Bove, was opened. It became the first medical institution in Moscow, founded with the funds of Moscow (all the other medical institutions were financed by donations of the Imperial Court in St. Petersburg or private persons). According to the statute of the First City Hospital "all poor and destitute people will be accepted and treated without money, except for those who have them".

Later on March 22, 1866 near Golitsynskaya and the First City hospitals a temporary hospital for typhoid patients began to admit people for treatment. It was rebuilt from two premises of a former cloth works; since 1878 it was called the Second City hospital, and in 1902 it was named after Moscow mayor Duke Alexander Alexeevich Scherbatov, after which for years it was known as the Scherbatov hospital.

State of the Art

Today, the hospital operates using the latest technology according to the highest international standards. The hospital is equipped with modern diagnostic equipment: CT, MRI, angiography units, lithotripters, X-ray, isotope and ultrasound machines, etc. Annually, over 400,000 people are consulted in the outpatient clinic and over 60,000 patients are admitted to the inpatient clinic. The hospital is a clinical base for surgical, biological and therapeutic departments of Bauman Moscow State Technical University, Pirogov Russian State Medical University, Sechenov Moscow State Medical University and two medical schools.

The Psychiatric Department operates at Pirogov Clinical City Hospital No. 1. The department was established to treat patients with psychiatric deviations. The department carries out joint work with single-discipline departments. Modern methods of examination are used for treatment. For patients a complex treatment based on physical and mental disorder is chosen. This allows the treatment of the following syndromes: amnestic, amnesic, asthenic, hallucinatory, delirium, depressive and hypochondriac.

The Intensive Care Unit for treatment of patients with combined somatic and psychiatric pathology in Pirogov City Clinical Hospital No.1 was opened in 2008.

The department provides highly qualified assistance to patients with background psychiatric diseases in acute and critical conditions requiring intensive observation and treatment. Specialists have accumulated experience in diagnostics, emergency care and basic therapy of somatic pathology in psychosomatic patients. The department is equipped with the modern Drager Evita 4 ventilators, syringe and infusion pumps, ventilators for transportation of patients, pumps for dosed enteral feeding of patients, defibrillator and monitors for measurement of vital parameters.